Abu Dhabi Desert Challenge:
This is an international race that takes place in the UAE. This year it took place in the Empty Quarter (Rab Al Khali) in the state of Abu Dhabi. Here is the website for further information.


http://www.abudhabidesertchallenge.com/jart/prj3/desertchallenge/main.jart
Marshalling:
We manned a checkpost in this race through which all the participants including bikes, trucks, 4x4s had to pass while on the track. It was a life time experience interacting with all these awesome drivers and lovers of the motor sport
Area: Liwa also called as Rab Al Khali or The Empty Quarter
Distance Covered: 1200 km 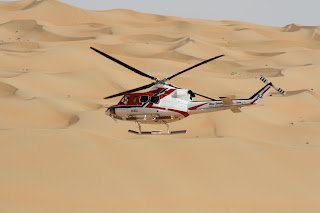 Offroad : 100
In our Vehicle: Just myself
Vehicle used: Nissan Patrol
When: March 2010 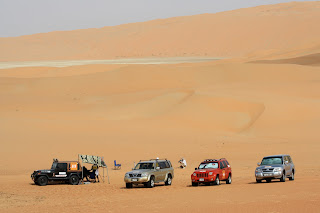 Short Story:
I started off in the afternoon for a 450 km of tarmac drive. Until Abu Dhabi the road is excellent and after that it is a single road leading to one of the remote areas of the country. One would wonder that after covering this distance into the Empty Quarter one would be in the desert with no one in sight, however there are small villages dotted all along the road and a lot of development can be seen. I'm especially impressed by the amount of greenery planted close to the town of Mezaira. 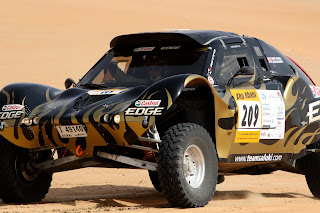 We passed through the famous car museum owned by the more famous Rainbow Sheikh. This has a big house on wheels and giant Mercedes on 5 ft tall tires and some other amazing items. However in my third try I have not been able to see it from inside as it was closed. It seems that they tried to make a resort next to the museum but that never took off and is in shambles these days. However there are a couple of big cages filled with lots of bird species in them. A good stop over to Liwa with a small filling station selling petrol at much higher price than on the road, so I wont recommend filling your tank from here. The next petrol station is about 130 kms ahead at Hamaim. The desert really takes shape at Hamaim and from there on the dunes are massive like small hills/mountains growing out of the soil and showing the majesty. We reached Hamaim at the sun set and took a short break. From there the road climbs up and down until you reach Mezaira, that was our destination to meet up the team already deployed. 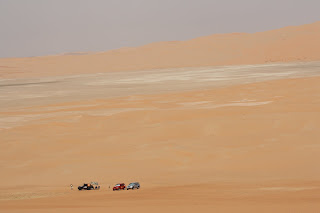 We called them and a meeting point was agreed, as soon as they reach we started our journey to the Moreb Camp where we were staying for the night. This was about 28 kms but the road goes through some very high dunes and the road at night was just like driving in the mountains as we could not see much otherwise due to dark. After reaching the camp we filled up our fuel tanks from the temporary filly stations setup by ADNOC. The camp was just under the steep slopes of Moreb where there are climbing competitions every year. All the locals with the highly modified vehicles compete in a famous competition every year. The participants, the support teams, the marshals were are staying at this site. It was amazing and thrilling to see all the drivers and their teams working on their respective vehicles/bikes for the next leg of the race. The next day was the last day of the race with 4 stages in it. It was a long day for the competitors.
We sat out on the chairs until late night after having a pathetic diner served in the dining area. Our snacks were better than the food honestly. We were supposed to be reaching our post by 8pm so we dismissed before mid night to get up early in the morning. We were provided with a Arabian camp to sleep in, that we setup with our bedding and slept for few ours.
Early morning way before the sun would rise we were taking shower and were ready in no time. Our post was about 22 kms from the road, therefore there was bit of offroad before we would reach and setup our post. And today our post was the first one so the bikes will be reaching us in no time. We drove for about 100 km to reach Ghost Town with abundant houses and broken patrol pump. This was the point from where we deflated our tires to enter the desert. It was a good ride and we made it to our post right in time. The post was setup and we were ready to receive the competitors. And here they come...one by one...all of them passed by 12pm. A media heli landed just next to us so we got great opportunity to click snaps of heli with a desert back ground.
Once all the participants passed our stage and we got a go ahead from the head quarter we drove off to Moreb Camp but through the desert. It was a great drive, 4 cars following each other on these majestic mountains of sand. We made it to the camp with a few stucks on the way. It was really hot by then. We freshened up and everyone decided to leave for Dubai rather than staying the approaching hot night in the camp.
It was a wonderful experience of driving in Liwa yet another time and Marshaling in an international event.
Posted by Wranlger at 1:50 PM