Touch the Northern Tip of UK 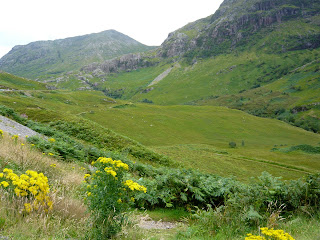 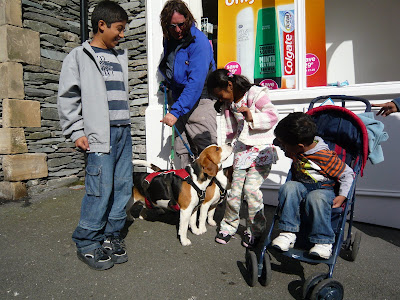 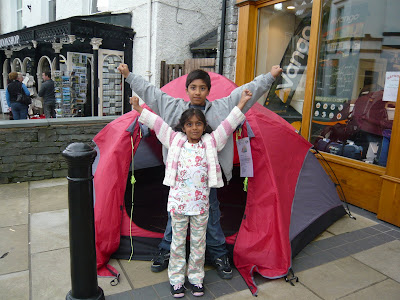 
We had to reach Manchester by the night; a rental car was booked last night for the travel today. It was 7:30am when we all packed our luggage in Wasim’s van to get dropped off at the car rental office. When we reached the rental company and found out that the car we booked was not available and they finally gave us a smaller car with a difference of two pounds only. It could hardly take the entire luggage we had for the next one-week. I was driving a manual transmission vehicle after several years. It took me a few minutes to get used to the car but we were already on the highway by then.
We left early to have a visit to the Lake District area before heading back to Manchester. M1 was not that crowded as we expected so we covered a good distance quickly. At Birmingham we took the toll road to save some more time. When we bypassed Manchester the scenery became hillier with green pastures and sheep dotted all over grazing over the grass.
Our first stop was Lake Windermere and we were already on M6 going towards it. We reached Windermere after a pleasure drive of 3-4 hours and visited the tourist information center for some brochures. I love the Lake District not only for its greenery and mountains but also for the outdoor shops it has in abundance. You would find a number of hiking, camping things that you don’t find otherwise at other outdoor stores. We had a drive along the lake and parked at one point to have a good walk in the town. Due to summer vacations it was quite busy and we found parking with great difficulty. This lake had several types of birds including the great Swans, Geese, and Ducks etc. Our kids went crazy after these animals especially as these birds are quite domesticated because of so many tourists visiting this place and feeding them with all sorts of stuff. Kids were able to touch the birds and this was the most fun for them and they were not ready to go anywhere else now. Finally they were convinced to have a walk in the town with a promise of stopping here on the way back. This was a very nice little town with streets going up and down with tourist related and other shops. We found some nice things, which are hard to find otherwise so we picked them up immediately. This shopping took a long time to finish and then we came back to the lake. It’s a very nice lake having a cruise service that goes to Amble side and to another stop as well. Lake is about 10 km long and deep enough to transport heavy stuff via small ships. There are mansions of wealthy people of one side and small towns on the other.
We bought fish n chips as snacks and came back to the lake. However children could not eat their fish n chips as a swan attached their food and then all those birds just ate the stuff with pleasure, we all watched them from around. After the fish n chips break, we hopped into our car and started our drive towards Ambleside, which is another small town on the lake with a number of outdoor shops. The drive was on a small road along the lake. It didn’t take us long to reach there and after parking we peeped into different shops and enjoyed the town.
“Although there has been a settlement since pre-Roman times, Ambleside is largely Victorian. A fort beside Borrans Park - named Galava - was built in Ambleside by the Romans, housing some 500 soldiers. It was built to defend the lower fells of South Lakeland from invasion by the Picts and Scots, and to guard the road to the Roman Port at Ravenglass via Hard Knott Pass.”
Coutesy http://www.visitcumbria.com/amb/amble.htm
In England all the towns seem to look alike due to their similar architecture. I don’t think so that there were any great architects born in this part of the world. But despite this all the towns look pretty and the old buildings are really preserved well. Another interesting thing we noticed was the parking ticket. One had to get a parking card from any of the shops and set it at the arrival time on it before putting it on the dashboard. The parking’s are usually for half an hour so the policeman may give you a parking ticket, had he found the time of arrival been more than 30 minutes earlier. It was interesting way of putting parking tickets. The tickets were just like the clocks that we usually use to teach children read time.
By the time we were done roaming around here it was late afternoon and we had one more place to visit in our today’s agenda and that was Grasmere. Its small town on one of the lakes but lush green and very pretty. It was 30 minutes drive away and we enjoyed this drive more than the town itself. It was a short stop in the town before we drove back towards Manchester and had to go through the same route to Ambleside and Windermere to catch the highway. The return drive to Manchester was boring comparatively as it was always on return journeys. We were sleepy and tired.
We had put Atif’s address in the GPS, which was very close to the Manchester Airport so we were cruising towards their place. We reached there without any glitch and knocked at the door to find our friends waiting for us, they couldn’t reach us earlier as our cell phone battery died in the afternoon. After we settled down an amazing dinner was ready and it was the best end to a long day. The night was long with chatting between old friends; there was so much to catch up.
Posted by Wranlger at 4:50 PM No comments: