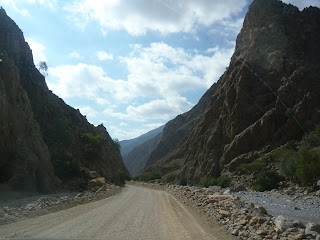 Area:
For reaching Wadi Bih one has to cross through Sharjah into Dhaid followed by Masafi and finally Dibba. At
Dibba we enter into Omani territory. There is no visa required but your passport is checked while entering into Oman from UAE.
The dirt track starts after only a few kilometers and then enters into the mountains for a breathtaking ride.

DAY1
We were planning for this trip for the last few days and despite there was a restriction of 12 cars we could not refuse to a few enthusiasts who signed up closer to the travel date and the total 4x4s were 14 in this trip. We started gathering at the ADNOC gas station on Sharjah-Dhaid road at 6:45 and left for the destination at 7:30 after a briefing. We were so fortunate to have a number of angels/children in this trip and the youngest one was only a few months old that stayed over night in the freezing cold. This was the maximum number of children I’ve seen on any of the club trips so far. 22 kids to be more precise.

We reassembled at a petrol pump right after entering into Oman not before negotiations with the authorities to request them enter a 4x4 who forgot their passports. After a few minutes of imploring they were kind enough to allow us to continue our trip. Everyone were very excited here, we gave a few minutes to the kids to run around and the others to use the bathroom facility at the pump.

The drive ahead was incredible as we made our way through the canyons on to the snaking up track. We had our next stop soon after we entered the gorges to let everyone apply their hiking skills to explore some caves looking over the dirt track. All the kids climbed up to where their parents or skills became a barrier for them to continue. But the sense of achievement was acknowledged by then and they were looking forward to the next stop already. Not to forget that some younger ones made their (at least) one parent use their climbing skills first time in all these years passed by, just to catch up with them.

The second stop was at the shepherd’s hut very close to the top at about 800 m high. For reaching here one has to go through the beautiful gorges followed by very steep track spinning up high. A Pathan has been living there for the last several years and his job is to feed and protect a bunch of goats, his Arbab has kept at this place. He gets his supplies weekly and lives with no one around in the area, earning a salary of 800 dirhamsa month. There is a small graveyard and remains of an abandoned village here. We also saw some new huts built here not a very long ago.

The views from one side of this hut were amazing. Children enjoyed running after the goats and roosters. We had a group photo (courtesy Faisal Zaheer) at the open field while we were continuously hit by a very cold wind all over. Wind was gusting at a high speed and was asking us, can you handle me whole night?
Jessil and myself then started locating the campsite coordinates provided to us but to no avail as both the GPS were pointing us into different directions. Therefore we thought to continue our drive and will figure out where to camp later in the day as the convoy was getting impatient.

We drove through the highest point on the tract at just over 1000 meters and experienced the same cold gust. The track starts descending here towards Wadi Bih and we reached at about 400 meters in just a few kilometers. The Omani checkpoint allowed us to pass through the barriers to visit the area closer to RAK. We were split into two groups at this point as 6 4x4s stayed at the top and wanted to enjoy it up there. We prepared lunch at this stop while the kids started their fire pit with a nice fire. What a hearty meal we had with all the variety available warmed over the stove. Everyone was stuffed and ready for the hike we planned for. We met a tire flat on one of the Prados. With so much help available the team changed the tire in no time. Many of the participants saw a tire change on a Prado for the first time so a bit of classroom setting.

Our next stop was a few miles ahead where we left the track and drove towards the hiking area as far as we could drive. Everyone stopped, jumped out and started the hike. We had a good one and a half hours hike and started back to find our campsite. After reaching the Shepherd’s hut five 4x4s left us after a Goodbye, as they only joined for the day trip. But we couldn’t find the other 6 who stayed at the top even through cell phones or radio. Anyhow we finalized our campsite but not next to the trucks rather at about 50 meters below from the dirt track for us to take the entire luggage down and then bring it back the next morning. The team did a great job with all the helping hands available including the children and the women. Jessil and company appeared on the radio and then physically at about the sunset time. They had a run towards Khassab and back after negotiating with the border checkpoint courtesy Habib (a local bro). Though this group camped at a different spot a little ahead of the other one with Jessil leading them, we had a couple of visits from them.

The tents were pitched and it was difficult to negotiate with the cold wind blowing at a high speed. A big fire was started in a big fire pit to make us feel better but the temperature drop with the wind really took its toll and slowed down the kids. A feast was prepared. Faisal & company, Khalid & company made excellent BBQ while John cooked steaks and jumbo prawns on the tripod grill. All this created such a fairytale atmosphere that is impossible to explain here and could only be experienced under the stars, cold and shivering, sitting next to the fire pit, baking patatoes, making hot dogs and mash mellows on the prongs made out of hangers.

I must appreciate the great company at the site in the shape of Faisal Zaheer, Rashid Tufail, John Price and their families who made it all the way from Abu Dhabi and were not late at the assemble point very early in the morning. Not to forget Khalid Bhai, Vinu, and my family.

The fire was made into charcoal; the lights were put out to enjoy the sky and the atmosphere around the pit. Absolutely marvelous!! Everyone was retired at or around midnight to experience a very chilly night. A few of us could not even get a sleep but somehow survived. Tough creatures!

DAY 2
Very early morning when I finally gave up my struggle to warm my body after forgetting my sleeping bag at home and tagging myself with my son half uncovered I decided to put on the fire. Right after, I got to know that I was not the only one as Khalikd Bhai crawled out shivering and we both started the fire to bring our bodies back to acceptable temperatures. It was wonderful sitting next to the pit despite having water flowing out of our eyes due to smoke, owing to the wind changing directions rapidly. Well Murphy’s law! What could you do about it? Soon my kids Sajeel and Iman came out followed by everyone to get the warmth of the fire.

Freshly prepared breakfast. Sausages in egg, fried eggs, hash browns, khageena, cheese and several types of bread topped with tea and hot chocolate are a few things to name that filled our stomachs. The sun came out and the things started to get to normal. While in the mean time the second convoy left for Dubai who camped a little ahead. After the breakfast Khalid and Vinu left for Dubai leaving three vehicles behind to explore further, not before they made a few trips of carrying luggage up to the trucks for us. Finally all 4x4s were loaded and we hit the track again. We had numerous stops for sightseeing and cave exploration and made out of the canyons onto tarmac early afternoon. Dibba beach was the next stop where kids collected shells and colorful rocks. We drove on the beach road through Khor Fakhan into Fujeirah had a quick bite on the way. Stopped at the Friday market in Masafi to buy some fruits and finally making it back home 7ish.

Courtesy: I organized this trip for www.meoffroaders.com and all the participants were members of this offroading club.
Posted by Wranlger at 1:59 PM

Email ThisBlogThis!Share to TwitterShare to FacebookShare to Pinterest
Labels: Camping and Offroading